Have an incident; report it. Have an injury; fill out an injury report form. Straight forward.

So what about hazards and near misses?

How does your business go about reporting these?

In my opinion, they’re a really important part of incident reporting. I feel like I’m constantly asking people to report their hazards and/ or near misses; because we don’t know what we don’t know.

You’re the person working your job, if there’s a hazard  that might cause you or someone else to be injured, your employer needs to know about it in order to fix it, and to hopefully ensure  no-one is injured.

A prime example: some time ago, I received a claim and after contacting the injured worker to find out what happened, she advised me that the equipment she was working on was broken. Apparently everyone knew about it and yet they continued to use it! Then she was injured (surely this shouldn’t really be surprising?). The injured worker ended up losing some time off work, required medical treatment and was on a return to work plan for a couple of months. The impact of such injuries is often unseen until you’re in that position; and it’s not just the work stuff. It’s all of the stuff outside of work; things like being able to attend to your own personal care (have a shower, use the bathroom, getting dressed etc), picking up or playing with your child, getting upstairs to your home, driving your car, playing soccer on Saturday. As well as being away from your workmates who you see regularly, it’s those things that have the biggest impact for you as an injured worker.

Let’s look at a current event for example; Dream World on the Gold Coast. They’ve recently had a significant and devastating incident occur which resulted in the death of four people. Death. 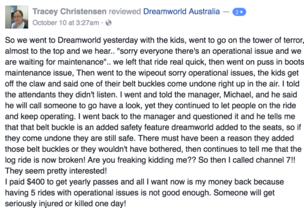 It’s since come to light that (at least) one person identified some issues and reported it to staff approximately and management and via social media two weeks before the incident. How’s the final line: “Someone will get seriously injured or killed one day!”. And within two weeks this exact thing had happened.

At the present time, it seems that the investigation has concluded that it was a freak chain of events which led to this incident, but none the less, a hazard was reported and people died. This just isn’t good enough in any workplace.

Tips on how to encourage a reporting culture: